We are hiring one full-time physical therapist. Apply now!

Our physical therapists have maintained a close working relationship with the medical staff at the UCD Department of Anesthesiology and Pain Management since 2001. Through this unique affiliation, our therapists are well positioned to combine their physical therapy expertise with insightful understanding of medical interventions for pain patients.

How do our physical therapists help with pain management issues?

Prolonged pain conditions may result in painful soft tissue and joint mobility problems, loss of fitness and muscle function, and psychological and social tolls. After assessing your specific presentation, your therapist will design a custom treatment plan to address both the primary source of your pain and its secondary effects.

Individualized treatment may consist of patient education, modalities such as heat or ice, relaxation techniques, hands-on treatment, or return to activity guidance. Once your pain is under control, your physical therapist may encourage participation in our Group and Personal Training Program which provides cost-effective, long term support and management of difficult pain issues. Angie Blaikie, MPT is our certified theraputic pain specialist. 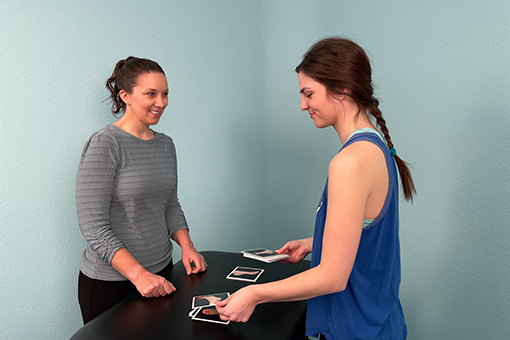 For your first visit, please arrive 15 to 30 minutes early to complete the new patient paperwork. You may also download the intake paperwork and fill it out before you arrive. Please bring the filled-out forms with you to your appointment or email them to frontdesk@folsomphysicaltherapy.com.

The level of service provided at Folsom Physical Therapy (FPT) cannot be delivered within the constraints of the insurance industry. While we are in-network providers for Medicare, FPT is out-of-network with all other insurance carriers.

Our self pay rates are as follows:

What Our Clients Say

I have had my share of Physical Therapy clinics, being one with a lombar 3 level fusion many yrs ago and a cervical fusion, not to mention a total knee replacement! Folsom Physical Therapy has been the ONLY PT clinic where I’ve seen a HUGE improvement in my pain level. They do a complete assessment of your issue and address it with their expertise. Other places will do ‘ultra sound’ heat pads, ice packs etc.. Not Folsom! They get you on their equipment, instruct you on how to use it effectively so you can ‘build up’ around the injured area while protecting it. It’s a place like no other in this entire area. Most of the medical community is familiar with them and have a great amount of respect for their success. It’s a place I have recommended to so many of my friends. But it’s also a place, you just have to go there as a patient and see it for yourself!

After two back surgeries fusing about 1/3 of my back, my doctor did not send me to physical.  I later learned that after back surgery, you really must go to physical therapy. The pain never got better and as a matter of fact, it got worse, A neighbor recommended FPT and said I should ask for Tim. I’m so grateful she did. I can’t explain the therapy he used, but things began to get better very slowly. Eventually, we decided it was time for a break, but Tim felt I would have to return a few times a year to keep things on the right track. So off I went with the exercises I had learned. It’s been about 3 months since I’ve been back and after overdoing it at Christmas, I asked my doctor to send a referral so that I could get “tweaked.” I honestly don’t know what I would have done if I hadn’t found FPT and Tim.

Please indicate your availability and preferred therapist, if any, and someone from our appointment desk will get back to you. If you would like to call to book your appointment, our number is (916) 355-8500.